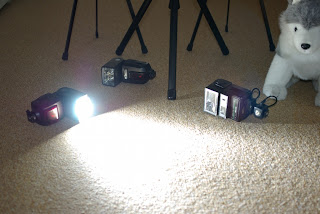 I've had a Metz58 flash for a year and a half and received a Pentax 540FGZ a few months ago.

I wanted to test various combinations of these flashes, see the effect of contrast control, etc.

First some remarks not related to the flash behavior:

I like both units, the bodies of both feel sturdy. I would perhaps rate the feel of the 540 flash head higher than the Metz. On the other hand the 540 has a battery cover which feels fragile, I operate it with care. Also the control sliders of the 540 feel less solid, but not in such a way that I feel that they are likely to malfunction.

In a controlled environment one should use manual for really predictable results.

In a dynamic environment with a master flash on the camera one should move the slave flash away/towards the subject to change the master/slave ratio or play with exposure compensation on both flashes.

Both the Metz-58 as the Pentax 540 are really nice flashes. I think I prefer the Metz as on camera bounce flash with the option to use the second reflector as fill. The 540 is really good as off camera flash and even has an optical slave mode.

I also considered the Metz-48 and Pentax 360 flashes. They are good options as long as one is not interested in using multiple flashes. The drawback of the Metz-48 is that it cannot act as a master/controller on camera, otherwise it would be a great second flash for me. The main drawback for me of the Pentax 360 is not that it doesn't have the swivel head (I assume I could live with that), but that off camera the automatic power off option cannot be disabled. I use off camera flashes a lot with optical or radio triggers and having to turn the 360 manually on after a few minutes (and restoring all its settings) is no option for me.

for more flash options and all kinds of details about the flashes.

An Ultra Narrow Grid Spot for your flash

Last week I made a grid spot from drinking straws for my flashes. You can read about these DIY devices here.

It took me a few hours to build one with 4.5 cm straw fragments. The result was nice. The spot creates a circle of light about 20 cm wide when used from a distance of about 1.5 meters. (Note: In The Netherlands you can find these black straws at the Xenos or the Ikea)

I wished however for a tighter beam of light and wondered if I could use the complete straws in a construction. I'm a bit lazy and didn't want to glue a cardboard/straw assembly together only to discover that it did not work. So I tried the following: 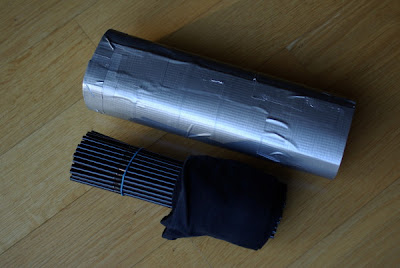 I bundled two packs of straws with two rubber bands (a band on each end) so that they formed a nice circle. I used an already home made snoot as container, c.q. flash mounting device. To prevent light leakage I wrapped a black cloth (a.k.a. a pair of socks) around the straws and put this in the front of the flash mounted snoot: 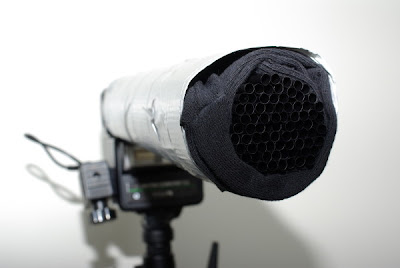 The result was great! This grid created a spot as shown on the first image. The hot spot is about 5 cm when used from a distance of about 1.5 meters. Not only was it quick to assemble, but this way the snoot can function as a snoot AND a grid spot. So the bundle of straws and the sock get a nice permanent place in my flash bag...